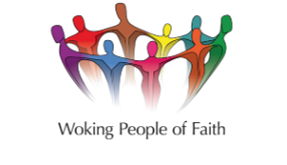 The audience comprised children, family, friends and staff of The Marist, Westfield, Barnsbury, St Mary's CofE, Byfleet and New Monument Primary Schools and also secondary school students attending the Shah Jahan Mosque.  About 60 people were in attendance, approximately 20 of whom were school children.

The general public were also able to listen to and watch the ceremony.

The Mayor of Woking, Councillor Will Forster, accompanied by the Mayoress, Hannah Thompson, presented the prizes to children for their work on the British Value they thought would contribute most to world peace.  Councillor Forster spoke about it being the 70th Anniversary of the Universal Declaration of Human Rights and how important it is to have children working on projects that help them think about this.  He commended the work done by WPOF.

The children's work was on display for all to see and there was hand painting using peace symbols for those who were interested.  Also, Peace Action had asked to have a table at the event and we agreed to this as their aims matched those of WPOF.

The event put WPOF's aims into action by having religious scriptures (Hindu, Baha'i, Buddhist, Jewish and Muslim) read by members of different world religions in Woking, including Imam Hashmi from the Shah Jahan Mosque.

Songs for peace were performed by the URC choir, a young female Muslim, while a universal Baha'i song was performed and acted with the assistance of all in attendance.

The event was very positive and those in attendance gave a lot of enthusiastic feedback.