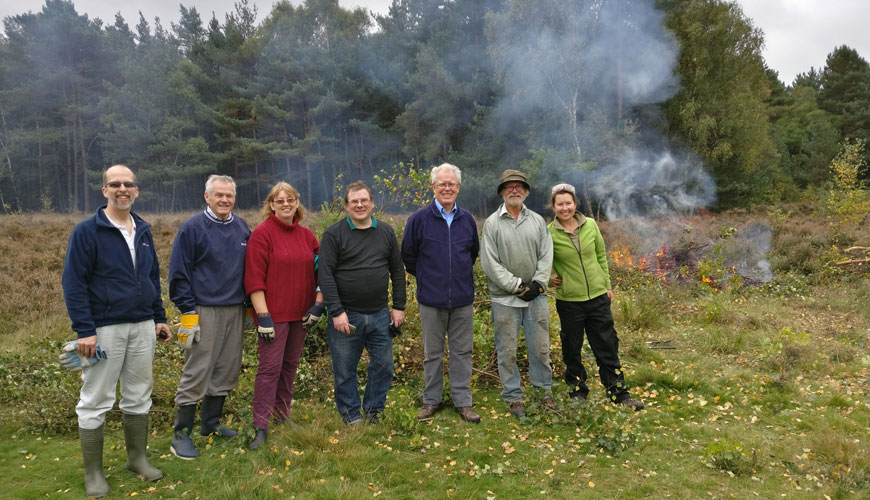 The Annual Planning Meeting took place on Sunday, 20th September and the Chairman's Report is as follows:

Dear Friends
At the start of 2020, it looked as if it was going to be business as usual for Woking People of Faith. We began, positively, with our Winter Meal on 05/01/20 at the Turkish Kitchen and looking forward to the coming year with no idea of the chaos to come.

By 25th January, the Coronavirus had taken severe hold in Wuhan, China and the Foreign Office advised UK citizens not to travel to the province of Hubei. By 31 Jan, the first 2 cases were reported in the UK and my wife suggested we postpone our intended short break in Italy in mid-Feb…just in case.

WPoF carried on its work with a lovely event, ‘Who do we think we are?’ on  01/02/20, finding out about people’s life journey to Woking and over the following 6 weeks, there were planning meetings for the Annual Refugee Week Event in June; the Football Tournament – which was scheduled for the same month -  the pitches were booked and teams were being invited; discussions were underway about our involvement in Woking’s Party in the Park in July and The Last Post ceremony at Brookwood in August. Meanwhile we were getting the International Day of Peace (IDOP) competition up and running, ready for the annual prizegiving event in the centre of Woking in September; and we were hoping to have a visit to Cambridge Mosque in early October.

…AND of course, Byfleet Walking Pilgrimage was in its final stages of preparation for 21 March – ready to rumble!

In those same 6 weeks the worldwide situation worsened considerably. At the same time, in the UK, the number of COVID-19 infections had jumped from 2 in late January, to 1140 in mid-March and the death toll had risen from its first confirmed one on 5 March, to 21 on 15th  March. The government had put forward a variety of plans to cope with the epidemic, while locally, some places of worship had already stopped serving refreshments in their places of worship.

After much heart-searching, in order to ensure we kept the participants safe, on 15th March we cancelled the Walking Pilgrimage in Byfleet.

Soon after, the government closed all schools and by 23rd March, the country was on complete lockdown, with only frontline health workers and teachers of key workers allowed to go to work; for the majority, daily exercise and essential shopping were the only things allowed to get them outside.

From 18th March, WBC cancelled ALL public meetings until 8th November, meaning that we could no longer have any of our meetings for the next 8 months! So, the Horsell Common Preservation Society (HCPS) event, Refugee Week, the Football Tournament, Party in the Park, The Last Post and IDOP were all COVID-19 lockdown victims!

We also had to cancel our face-to-face Trustees Meeting on 21 April and prepared to have email discussions instead.

Happily, fantastic Rev Phil Simpson came forward with his knowledge of Zoom and from mid-April, got us all up and running online, meeting from our own homes! Thank you, Phil!

For the last 5 months, WPoF has been extremely busy. The Trustees have met twice, the Officers have had several meetings and the Events Committee are currently meeting every month to keep up with potential changes in the COVID-19 rules, to keep the format of our events up-to-date - working parties are meeting to organise the specific events that are on our calendar. The website is being updated regularly and now we have a ‘Thought for the Week’ section.

WPoF had our first online event: the Prayer Vigil on June 25. Since then we have also had regular online ladies’ coffee mornings and the first face-to-face, socially-distanced (and very successful) event - the interfaith Cricket Tournament on 12 September!  And, coming on 26 September, the HCPS event to preserve the Common will go ahead using the Rule of 6!

In preparation, with a practice run already out of the way, is the online cooking show, where we will be guided into preparing a cultural dish in our very own kitchens.

In the final stages of preparation is the Doing God Together event on 12 November (online) which will involve speakers from 5 Faiths on a very appropriate topic and, with enough focused publicity, we hope that this very exciting event will have a very large audience – potentially much larger than we could have had in person.

And so, currently, with a 2nd wave of infections spreading rapidly, none of us can say for sure exactly what the future will bring and the precise nature of the continued upheavals to society due to COVID-19. However, I am confident that we CAN say that WPOF will continue its work in whatever form it can, in order to fulfil its aims for the people of Woking and its environs.

The Trustees Meeting took place via Zoom on Friday, 17th July at 4pm.

Normally, we should have the AGM followed by the Trustees meeting and the election of the new officers.

Due to the abnormal situation with the Covid-19 pandemic, the Officers took advice and decided that the AGM should be postponed - and with it, the election of the Trustees Board - until a reasonable time. In the meantime the Trustees and the Officers will continue in their roles until such time as the new AGM can be arranged, safely. We look forward to seeing you at the new, online events, currently being organised.

Dear Members, Friends and Supporters of Woking People of Faith

In line with the instructions from the Government during the Coronavirus emergency and following the example of Woking Borough Council, it is with a heavy heart that Woking People of Faith has to cancel all upcoming events in our calendar until further notice. We promise to keep you informed of any changes to this situation as and when we are able. ***Please do keep checking the News Page and Facebook as we keep these regularly updated with online sessions and meetings. Our Trustees will post a 'Thought for the Week' from their own religion too, which we hope you will find encouraging during this time. We look forward to seeing you in the future and pray that you, your families and communities will be kept safe and healthy during this crisis.