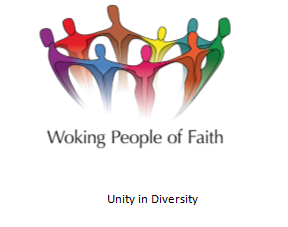 Kauser and Simon opened the proceedings and welcomed the audience at 12 noon.  Then the performers from New Monument School acted out their play to commemorate the historic meeting between Sultan Malik Al-Kamil and Saint Francis of Assisi in 1219 CE.  Francis and his fellow monk, Illuminato, were helping the wounded soldiers and wanted to stop the fighting between the Christians and the Muslims, so they bravely went as emissaries to see the Sultan, the leader of the opposing side.  The children clearly put across the message that these two important people found out that there were a lot of similarities between the two faiths when they sat down together to eat and discuss.  As a consequence, Peace Talks were begun and the war stopped eventually.  After the play a group of children from the Shah Jahan Mosque sang a nasheed (Islamic song);  followed by Mike Cope, a member of ChristChurch, who presented and accompanied two popular songs, which were anti-war and pro-peace on his guitar.  The audience was invited to join in.

Then the Mayor, Councillor Beryl Hunwicks, stepped up to give a few words on the subject.  She then presented prizes and certificates to the children, who won their section of the competition with entries based around the theme of 'The Sultan and the Saint.'  Their pictures, poems and writing were displayed on the boards for all to see.

Free henna painting of peace symbols was also available throughout the event.  There was a display of books and resolutions about Peace run by Irene Ridgeon.

All in all there were about 60 - 70 people present.  The event finished around 1pm.