Can Faith Institutions Save Our Planet? 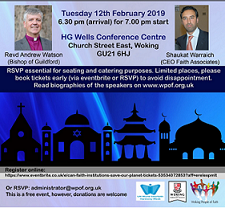 An amazing event was organised on a very important subject which attracted over 150 people on Tuesday 12th February at HG Wells.  Simon Trick, Chair, introduced the event and a very short video (Human Impact On The Environment) was played, which can be found online here.  The Bishop of Guildford, Rt Rev Andrew Watson and CEO of Faith Associates, Shaukat Warraich answered the question, 'Can Faith Institutions Save Our Planet?' and covered the subject according to their own faith perspectives.  Although particular attention was given to faith institutions and their role in being eco-friendly, it was unanimously agreed that every individual, regardless of faith or none, should unite for this cause.  "Climate change remains one of the greatest challenges of our generation, and it's been great to see churches getting on board with the Eco Church movement as a very practical step towards reducing their carbon footprints."  (Bishop Andrew Watson)  "Spiritual Sustainability is linked to environmental sustainability, and how Mosques and Islamic religous practices have historically conserved precious resources needs to be further enhanced in the 21st century. Learning from other faiths and through scientific discoveries, developing environmental consciousness should be at the heart of all faith institutions."  (Shaukat Warraich)  LA21, Waste Solutions, Woking Borough Council, Plastic Free Woking and a new business, Bair and Fair were present to inform attendees of their work and invite people to join the cause in helping to save the planet through changing habits and being more actively involved with green spaces.  Everyone enjoyed a delicious hot buffet meal and continued the conversation followed by a lively Q&A session.  The evening was concluded with closing remarks from the Mayor of Woking, Cllr Will Forster who summarised the event and thanked the speakers for their contributions.

Read coverage of the event in Christian Today here

Bishop Andrew Watson is the 10th Bishop of Guildford, overseeing the work of the Church of England across most of Surrey and parts of North East Hampshire.  Having completed a Law Degree at Cambridge University, Andrew returned to Cambridge to study Theology and was ordained as a priest in 1997. Since then his ministry has been focused in the South East and the West Midlands, with parishes in Redditch, Notting Hill and Twickenham.  He became Bishop of Aston in 2008 and Bishop of Guildford in 2014.

Bishop Andrew is the author of books on leadership, confidence, the Exodus story and Christian vocation.  He was strongly involved in interfaith work during his time in Birmingham, especially during the riots in the summer of 2011 which culminated in the death of 3 young Pakistani men in Winson Green.  Bishop Andrew has also spoken out on the refugee crisis, publicly urging the government to increase its proposed allocation of refugees to the UK.  He led a seminar at Guildford Cathedral to brief parishes and give a platform to expert speakers, at which he coined the term 'PEACE' (prayer, education, action, campaigning and engagement) in response to the crisis.  Bishop Andrew's grandparents harboured a Jewish refugee family in the second world war who were fleeing from Nazi Germany.

Bishop Andrew has regularly spoken on the need for the Church to be engaged with issues of global warming and climate change, a theme that is part of the mission statement of the worldwide Anglican Community.  He has also witnessed the effects of climate change first hand through his visits to Malawi, Uganda, Kenya, India and China, and meetings with fellow bishops from Pakistan and the Philippines.  In 2018 Guildford was delighted to be the second Church of England Diocese to receive an 'Eco Bronze' Award for its work in this area.  Although there is much further to go, the engagement of the Churches in the environmental agenda has been impressive.

Shaukat Warraich is a multi award winning social entrepreneur and is currently the CEO of Faith Associates, a pioneering enterprise, developing strategies, organisational and operational capacity for 3rd sector and commercial entities in the UK and abroad.  He has held a number of leadership positions in the commercial and charitable sectors helping to increase performance and sustainability.  He has been responsible for producing a number of key pieces of literature and community interventions in the UK and abroad.

He has advised and worked with a number of UK and European Government ministries.  He was the lead adviser and consultant commissioned by the British Government for the national consultation and ultimate launch in 2006 of the Mosques and Imams National Advisory Body which constitutes over 600 Mosques and Islamic centres in the UK.

He has worked with and advised over 30 UK local authorities and regional governmental agencies on matters of social policy, intergration and working with faith institutions. He has also advised and worked with a number of European and North American governmental departments and agencies to develop community interventions and strategies to interpenetrate policy on the ground. He has also been invited and chaired the youth empowerment round table for the United Nations at the 'Alliance of Civilizations' conferences in Madrid and Istanbul.

To much acclaim during the London 2012 Olympic games, he founded and launched the Iftar 2012 initiative, where Olympic teams, dignitaries and ministers were hosted for Iftari in various Mosques in Olympic cities to share the Ramadan experience.  Olympic teams, Ministers and diplomats from the USA, UK, Afghanistan, Egypt and others were hosted and was reported around the world.

Shaukat is also the founder and Head Teacher of the Slough Community School, an initiative tackling educational underachievement in the Pakistani community.The School was awarded the 'Excellence in Education' Award by His Royal Highness, Prince of Wales through his Mosaic scheme in 2009.

He has authored several publications, in particular the Mosque and Islamic Centre Management Guide (2007), the Mosque Open Day Guide (2008), and the Madrassah Management, Safeguarding Guide (2009).  He has pioneered safeguarding protocols in Mosques and Madrassah and his literature and training is in use by various local authorities and offered as good practices for all faith communities.

A key area of his work has also focused on safety and security of faith institutions, he was commissioned by Birmingham City Council to devise an Incident Management Guide 2016 supported by the UK Minister of Security.  This Guide has resulted in many workshops and the development of www.mosquesecurity.com

He has established a global benchmark of standards for Mosques and Madrassah under the Beacon Mosques standards  kite mark (2017).  He is also the chief editor of www.imamsonline.com a non-sectarian blog platform showcasing good practices of Imams globally as they are facilitating the recruitment and placement of Imams in various community and public sector roles. He has also developed the first African Mosque and Madrassah management guide under the sponsorship of the UNDP in 2017-18.  The guide has been piloted in Tanzania and Zanzibar.

In 2018 he also launched the inaugural and much acclaimed British Beacon Mosque Awards showcasing the Best in British Mosque and the first accredited 5-star Mosques in the UK. 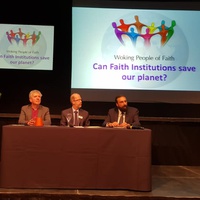 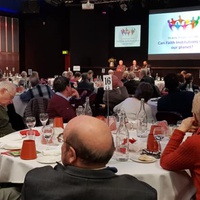 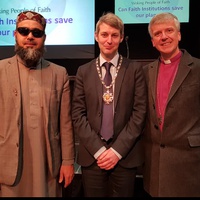